Evan and Kari Leong’s children are the youngest team to win Startup Weekend Honolulu and ranked nationally as well. From left, they are Buddy, 12, Koko, 10, and Kyndra, 6. Photo: Karen DeBorja

Led by a seventh grader, a family team invents a useful accessory, wins a competition and learns what it takes to be entrepreneurs

When seventh grader Buddy Leong attached his GoPro camera to his hat, he noticed some design flaws. The strap that attached the camera to the hat was awkward and itchy, and the cap’s brim extended so far in front of the camera that it was visible in some shots.

Instead of accepting those issues, Buddy set out to correct them. With help from his siblings, parents and mentor Collin Kobayashi of 3D Innovations, Buddy’s idea evolved into the Menehune Hat Clip – an accessory that’s piqued the interest of GoPro and helped Buddy’s team of entrepreneurs win first place at the Global Startup Battle at the annual Startup Weekend Honolulu event in November. The team also ranked well internationally, competing with people from 60 countries worldwide. They tied for first runner-up in the Champions Track and second runner-up in the Great in the Making Track, according to the Global Startup Battle blog.

The Menehune Hat Clip is “fully adjustable and removable,” explains Buddy, who demonstrates how the clip – reinforced with magnets – can be clipped to the end of a hat’s bill, attached to metal, hung from a curtain or put on a tripod. It also tackles other potential issues: If it gets swept off by a wave, it floats, and the clip can hold non-GoPro devices, such as a small camera or mobile phone. 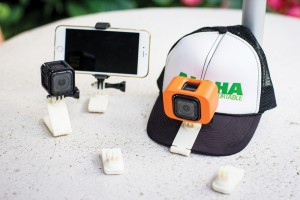 The Menehune Hat Clip solves some of the problems that Buddy Leong noticed in an existing GoPro camera clip. Photo: Karen DeBorja

In addition to Buddy, the “Menehunes” team includes siblings Koko, 10, and Kyndra, 6.

Several schools have programs that promote entrepreneurship, including Punahou School, which all three Leong children attend. But Kari says it helps to have these skills reinforced at home. “Unless parents are taking it on themselves to teach entrepreneurial skills to their children, many don’t get exposed to it unless they’re highly motivated and it’s something they know they want to do,” she says.

Evan, founder of standuppaddlesurf.net, calls himself a serial entrepreneur and is involved in several ventures. Kari is doing doctoral research on whether entrepreneurs are born or raised, and which skills can be taught and nurtured throughout a lifetime. Eager to give their children entrepreneurial experiences of their own, Evan and Kari challenged them to participate in Global Startup Weekend, an event that doesn’t usually attract the pre-teen set.

“It’s good that the organizers, especially the organization here, kind of embrace younger entrepreneurs wanting to do something and give them a shot,” Evan says.

Luke Tucker, a venture associate at Sultan Ventures and one of the judges for the Startup Weekend Honolulu’s Global Startup Battle, says young people have performed well at the annual weekend events, sometimes besting their adult competition. However, he points out, the children are usually in high school, not elementary and middle school like the Leongs. “There’s been nobody who’s been as young, or done as well,” Tucker says. “Not even close.”

“Unless parents are taking it on themselves to teach entrepreneurial skills to their children, many don’t get exposed to it.”

Since 2009, the Global Startup Battle has been bringing entrepreneurs, developers and designers together for weekend competitions around the world. On the first day of competition, at least two dozen entrepreneurs pitch their ideas and voting determines which 10 are the most promising. Focusing only on those 10, teams then have 24 hours to come up with a business model and a prototype, get customer validation and, finally, deliver a five-minute presentation to the judges.

According to Tucker, the Menehunes’ presentation stood out because they had a prototype and business model, and had gone out to identify potential customers. “I thought they did a great job of utilizing multimedia to show their learning,” he adds, noting they used video to help meet some of the judging criteria.

Reaching out to potential customers and stores was a positive experience for the Menehunes, who discovered that everyone they talked to was interested. “One hundred percent said yes and 100 percent gave prices above what we were going to sell them for,” Buddy says. The prototype cost $4 to make, and the Leongs thought they could sell them for less than $20, only to find stores thought they could sell for $30 to $40. “They said they would totally buy them and bring them into their stores.”

The experience also strengthened the Leong family’s connections. “We really wanted the kids to do this together as a family because Evan and I work together as a couple and they see how it strengthens our marriage because we have the same goal in mind. We also believe in keeping the family together to grow together,” says Kari, who adds that the kids balance out each other’s strengths. “It helps to have a common goal because the whole family succeeds together.”

Check out the Menehunes team’s YouTube channel at tinyurl.com/menehunes, which includes a video on their hat clip innovation